A few years ago, I switched away from Firefox, even though it had the best browser extensions (add-ons,) to Chrome browser because it was the fastest browser available at the time. It was painful to give up the extensions I loved, but the speed of Chrome browser was undeniable. So I imported all my bookmarks and passwords into Chrome and made the switch.

Since its debut, Chrome web browser has grown in popularity, though its once-stellar reputation has taken a bit of a hit as of late. Examples of Chrome-only sites are more and more common, reminiscent of the days when Microsoft's Internet Explorer dominated the web browser market. It's been shown to be a massive memory hog as well, slowing down machines as users open more and more tabs.

Yep, by the end of 2017, Chrome browser became the slowest browser, in addition it used way too much memory (RAM) and became unstable with many tabs open. And so I changed back to Firefox whan it came out with it's all new Firefox Quantum browser along with two corresponding mobile versions as well: Firefox Photon and Firefox Focus. Firefox Photon is the smartphone app version of Firefox and Firefox Focus is a super-safe, no tracking, no ads, no history and no saved credentials, smartphone browser. Just fast and anonymous.

If you're looking for a change this 2018, why not start with your browser? Ditch Chrome and switch to its longtime competitor, Mozilla Firefox. It's as fast, or faster, than Chrome, and integrates tools to boost your privacy online while making it easier to share and save everything you find on the web.

It's Just as Fast as Chrome

Both Firefox and Google Chrome are, at least in various benchmark tests, pretty equivalent. While Firefox, in tests performed by Mozilla, might outperform Google Chrome when loading webpages in private browsing mode, or use less RAM when dealing with multiple tabs, other independent tests show the browsers are often evenly matched when it comes to performance. At worst, you'll be switching to a browser that's just as fast. At best, you'll be using one requiring less RAM while being just as responsive.

You Can Still Sync Across Devices

Like Google's syncing functionality that lets you see your browsing activity across all of your devices, Firefox's own syncing functionality makes it easy to send that webpage on your desktop to the phone in your pocket by selecting the option in your URL bar. If you're someone who uses multiple Google accounts on the same machine, you can easily do the same with Firefox's own Multi-Account extension.

Firefox Blocks Trackers Out the Box

Need to stop a site from tracking you? Firefox automatically puts the kibosh on trackers hiding in a web page's code, protecting your browsing data from being recorded by third parties looking to sell you targeted ads. It works in both regular and private browsing mode. That removal of invasive tracking code also means pages load faster compared to browsing in Chrome.

There are a slew of useful features built right into the browser, mitigating the need for me to add a bunch of third-party extensions and apps. The free "read-it-later" service Pocket, which I love and use every day, is now integrated into the browser, so I can save any page easily with a single click for later reading on any of my devices. Like taking screenshots? With Firefox Screenshots, it's easier than ever to click a button and save partial or entire shots of a web page to your hard drive or your cloud-based screenshot repository. Like to email a story you found on your PC to a friend? It only takes two clicks: Click on the three dots, then click on "Email Link" and Firefox will create an outgoing email message with the URL you want to share. So easy! 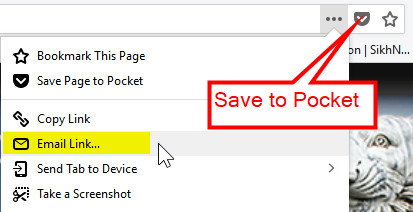 As someone wary of third-party services that might contain malicious code, as well as wanting my browser to be as fast and stable as possible, the fewer extensions I need to add to my browser, the better. Firefox's integrated screenshot tool, easy access to saved Pocket articles, and automatic disabling of invisible browser activity trackers make it a more secure and user-friendly experience than Chrome. And I love being able to toss an open tab on my PC to my phone to continue there using the one click "Send Tab to Device."

Some Extensions Work Across Browsers

In terms of extensions, Google might have Firefox beat, but the company's adopting the WebExtensions API, making add-ons found in Google Chrome and Microsoft Edge compatible with Firefox after some minor modifications by developers.

Older Firefox extensions are now considered "legacy" extensions, but you can find potential alternatives by visiting your list of add-ons (just click the little three line "hamburger" menu in the upper right corner and select "Add-ons") and selecting "Find a Replacement." If there's no alternative extension available at the time, you'll simply see a page of featured extensions all compatible with the new version of Firefox.

Help make this column better by sharing your tips or experiences with your own tech with the Sangat. Email me and tell me your story, and keep sending me your suggestions for column topics, along with your own favorite smartphone app recommendations and reviews so I can share them here. Just email them to me at [email protected]

Donate to the COVID-19 Community Meals Service. These meals are delivered to the local Pathways Homeless Shelter and Moving Arts for people in need during the COVID-19 pandemic.

View live video from our Gurdwara every Sunday from 10:15am to about 1:00pm, MST, and a weekly reading of the Akhand Path from Wednesday through Saturday. Akhand Path dedications are available here >

Hearts and Hands is here for you. Whether you need help or want to help others, reach out to us here >